Earlier this year I got the ever so exciting news that I had been chosen to be a Mark Warner Mum and was. going to Mark Warner Lakitira in Greece. This was the first time we would be visiting Mark Warner and we could wait to find out if our teens would love this kind of family activity holiday.

Here we were nearly 6 months later heading out to Lakitira resort Kos in Greece for our Mark Warner Holiday.

We have never been on a package holiday before as a family. Our flight was booked from Gatwick so we decided to make the 6 hour journey the day before and stay at Gatwick overnight and be chilled and prepared for the early flight.

Getting To Mark Warner Lakitira Resort

The next morning we are up and ready to drop our car of with the meet and greet guys at Sky Park Secure which is so much less grief when traveling with kids.

And as regular customers I trust them which is a huge deal when leaving your car with someone.

The flight was scheduled on Germania airlines. It was organised and efficient. We were met promptly at Kos airport to be taken to our coaches ready to sweep us off to resort, which was only 15 minutes away from the airport.

Never having been on this sort of trip before I may have been a bit laid back about the welcome meetings. And may ahem, have spent too long taking photos on the way there and been late. But in my defence the resort it so pretty.  I have always thrown my organisation skills out of the window as soon as I land on foreign soil. But holidaying with Mark Warner requires a certain amount or organisation.

Now this is not a negative, it just takes some getting used to when one is not used to it. Mark Warner is so different from any holiday we have ever been on. It is all about the sports and let me tell you they are pretty spectacular but you have to be in the loop to know what is going on.

And that means being on time to the welcome meetings. (I was so lucky the staff were amazing and caught me up on what I needed to know) Also the app is a great resource which we used all the time.

The Rooms At Mark Warner Lakitiria

Our room had everything you could need; it was split into 2 rooms with a walk in wardrobe so LOADS of storage with a safe. There was tea and coffee-making facilities and a fridge. It had a large bathroom with toiletries and a hairdryer. And a separate toilet that is fab when traveling with older children. We also had a large balcony overlooking the gardens.

We had only been on resort 2 hours when Joe head off to the kids dinner with the kidz club.

The clubs run activities throughout the day and evening. Having a break for lunch to allow the kids a bit of down time and trust me they need it. The activities are full on and exciting, with sailing, windsurfing, paddle board tuition. There are also pool games and activities in the hut.

Joe never stopped for the whole week. We found he was waking us up early for breakfast because he did not want to miss out on a thing. He made some lovely friends and the kidz club staff were incredible, especially Amelia who Joe just adored.

I can’t believe he came home being able to sail and windsurf after only a week.

Jack for reasons, which we can’t, fathom chose not to get involved with the indy club for older teens. I am not sure if it was GCSE results stress, or just he needed a wind down. But he chose to chill out with Chris and I, however we did take part in quite a lot of water sports together. 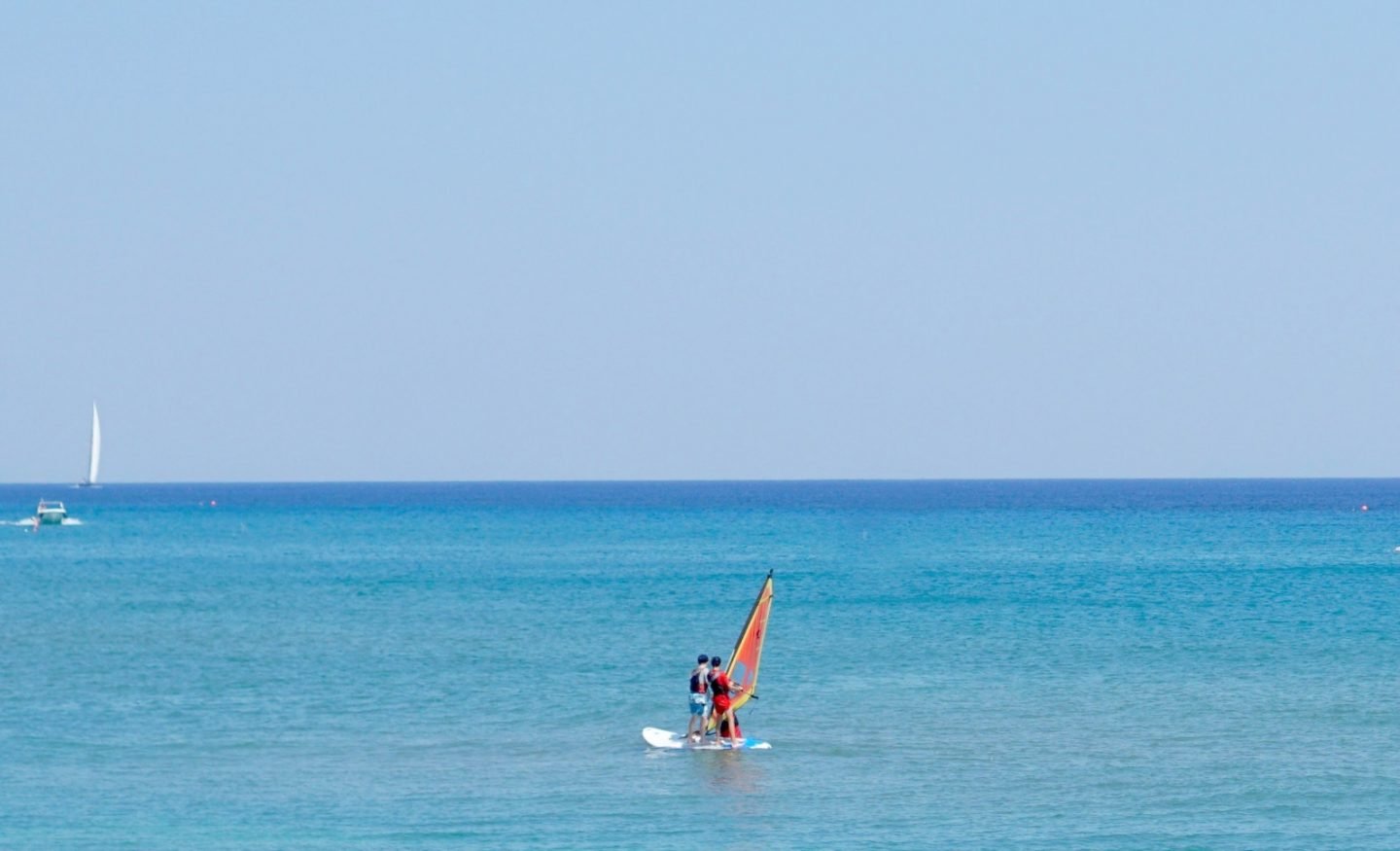 This is why you go to Mark Warner Lakitira. It took me a few days to get it, and then once we started to getting involved more it was like a light bulb moment. The water sports facilities are incredible, we canoed, sailed, went out on a catamaran and paddled boarded.

My only regret is that we did not sign up for sailing and windsurfing tuition on day one. As I have to say, I caught the bug, but left it far to late for a course. However it was nice just to chill for the first few days! You can’t have it all can you? And that gives us all the more reason to go back again.

The beach team were wonderful and Finn our sailing instructor deserved a medal after an hour with me. Lets just say I was not a glamorous sailor; in fact I was not that good at all. I even fell under the boat and had to be rescued when I got of after my lesson.

Jack on the other hand was a natural and was able to control the boat in a red blue flag winds. Unlike me, who had it spinning in circles as Chris and Jack watched on in hysterics. However I loved it and am determined to master sailing! Even though I was shaking like a leaf. 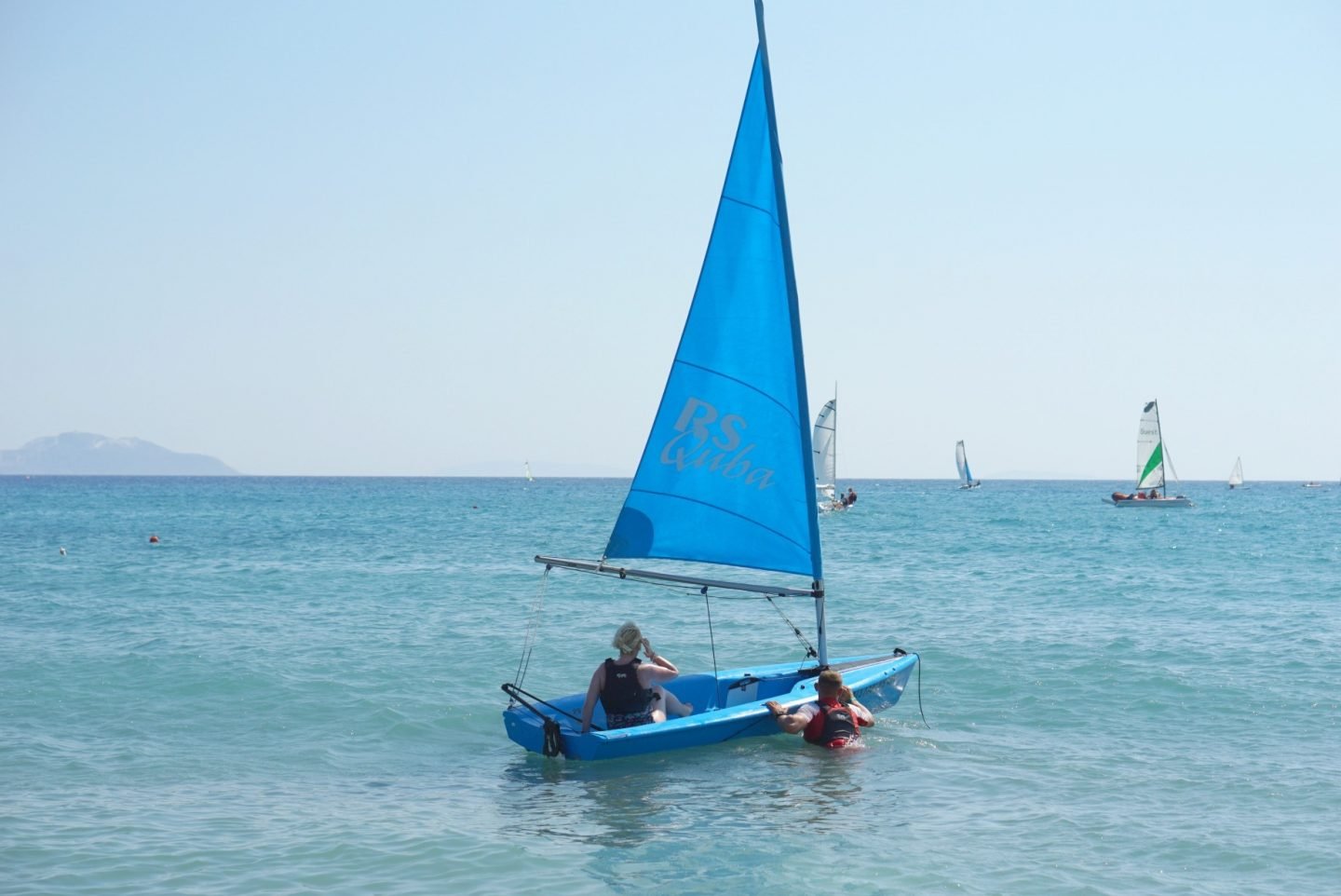 Again different from anywhere we have ever been, I really struggled with Joe not wanting to eat with us. I tried every trick in the book to get him to dine with us. But he was having none of it. For Joe dinnertime was an absolute treat, dining with his friends and the club in the Italian before they head off for the evenings activities.

Food is fuel at Mark Warner; there is plenty of it. Lots of delicious salads and cold options plus also a rotation of menus and hot meals each night. We chose to eat in the Trattoria most nights because Jack preferred the menu in there. And there was a great selection of pizza and pasta dishes and the roasted vine leaves and vegetables were just delicious.

And for lunch the snack bar offered lots of fab options my favourite being the grilled chicken salad which was also great value at €6 and so good. You could get a take out or grab a table and glass of wine and dine with the sound of the sea in the background.

Was Mark Warner Lakitira For Us As A Family With Teens?

It took us a few days to adapt and get the whole concept, and if you don’t look at the bigger picture you just don’t get it. But wow once you do Mark Warner Lakitira is incredible for teens, there is so much to do and get involved in. The key is organisation and just jumping in feet first.

And I promise if you do you will love every minute. Would we go back? In a heartbeat! I still can’t believe what Joe got out of the week. Watching him windsurf competently on the last day took my breath away. The whole buzz about the resort is so friendly. The staff are warm and friendly and all the other guests were the loveliest people. And furthermore I am determined to master sailing!

Thanks for much Mark Warner for choosing me to be a Mark Warner Mum it’s been an honour and so much fun, we had a wonderful family holiday.

Want to read more check out my hints and tips post for Mark Warner Lakitira for families with Teens.