We have grown up hearing tales of eggnog, everyone drinks it in Christmas Films. Can you think of a Christmas movie that doesn’t mention it?

I had never tried it, but it just sounds like something I would love. I mean come on, whats not to love about Christmas in a glass?  Especially for a cocktail lover such as I? However when I decided to give it a go and make home made eggnog this year but found so many variations of the recipe.

There were two common ingredients from all the recipes I read, and those were egg white and milk. So I decided, you know what, I am going to make my own version. As long as it contains egg white and milk I can’t go far wrong. And what’s better when creating a seasonal cocktail, than one that’s tailored to include your favourite drinks? A kind of loose version of the traditional drink.

These are two drinks I know many will have in their drinks cabinet all ready to go. The fact I had the ingredients ready to go, made this the quickest and easiest cocktail I have ever made. I had it created, lit and photographed within 20 minutes. (Something that usually takes me hours) Leaving me plenty of time to sit back, put up my feet and enjoy a delicious Gin and Baileys cocktail the eggnog way.

Here is how you make a Gin and Baileys Christmas Cocktail, perfect for sipping as you watch Christmas movies, feeling festive or impressing friends with your impeccable hostess skills as you whip up a cocktail in minutes. 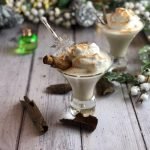 This recipe contains raw eggs, if you would rather avoid this miss out the whipped egg and sugar topping. The cocktail still tastes great.