Last Sunday we decided to spend a family afternoon in Manchester at the Printworks and catch a movie and lunch, it’s been ages since we went to a movie and were all quite excited to see the new Captain America Civil War Movie. I managed to get it all arranged a booked the IMAX screening followed by a late lunch at Frankie and Benny’s. When the boys were small we used to visit Frankie and Benny’s loads, but them for some reason haven’t been for years. But I love the atmosphere there so decided this is where we would eat. 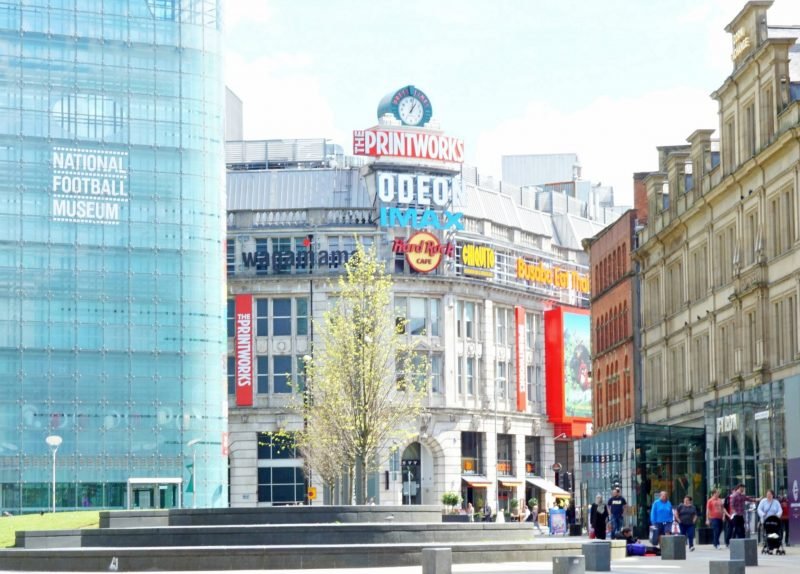 Sunday morning came and Jack announced he was not going to come with us, it felt like quite a big moment, huge in fact. Our little boy telling us he did not wish to participate in a family day out. In all fairness he has had his Science and Spanish GCSE’s this week, and wanted to spend time at home chilling, but a small part of me felt that dreaded realisation that this is the start Jacks withdrawal from family activities, he has started to build his own social life that we aren’t part of, weeps! 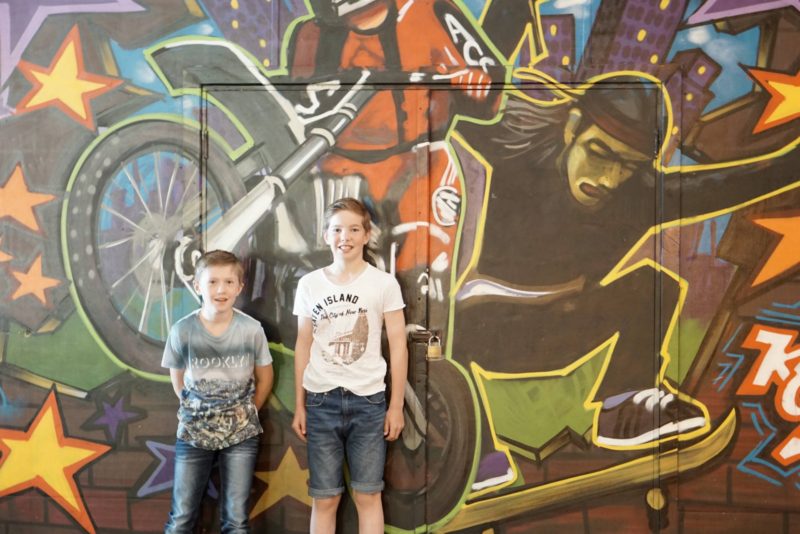 However Joe was doing a celebratory dance and asking if he could take his best friend Fin in Jacks place. Joe and Fin have been best friends since they were 4 months old and to be honest at times are rather like siblings, so once arranged we set off with two very giddy boys in tow.

We arrived in Manchester to beautiful blue skies, and the boys charged off to the area outside the Football Museum to burn of some steam as I took a few photos, what I didn’t anticipate was quite how giddy they were and that getting a photo of them was damn near impossible as they scooted around, even it seems in sports mode.

One inside the Odeon we headed to the snack bar whilst the boys made the life changing decision of what snack to take into the cinema, seriously it took them ages to decided. The snack deal was such great value with 2 kids packs, which included sweets popcorn and a juice each, two adult soft drinks and popcorn to share at £9.99. Chris and I couldn’t finish our popcorn it was huge.

This was the first IMAX movie I have ever seen and it was incredible, it honestly felt like you were there. It took me a good 5 minutes to adjust as it felt so full on but once I had, I settled back in my comfy chair and enjoyed the movie. But lets face it Iron Man, what’s not to love?

After the movie we headed to Frankie and Benny’s and I must say they haven’t lost it, the restaurant in the Printworks has just been renovated but still had that fab American Italian charm, with the great pictures on the wall that I could spend hours looking at, and the 1950s music, it’s always feels so upbeat.

Callum our server went a long way to making our meal fantastic he was so much fun and the service was great, he was on top of the drinks for the boys, and enabled them to have their main with our starter thus preventing them getting bored.

I went for the meatballs and omg they were so so good, such a huge portion that I could not eat them all. I think the highlight for the boys was the sweet shop dessert, ice cream in a tray with lots of goodies such a popping candy, marshmallows, smarties and jellies. They were actually quiet the whole time they were eating them, apart from nodding at each other appreciably at how great it was from time to time.

It was lovely getting out and spending a chilled afternoon at the Printworks and is most definitely something I would do again.

Next time we may go a little earlier as if you visit on a Saturday or Sunday it is £10.00 cheaper for a family of four if you visit before 1pm, such a great saving, and after a spot of lunch you are home for an afternoons chilling.

And lastly just check out these two photos below, the little monkeys had seen naughty picture on the pavement, (I have obscured it now) I could see they were up to something but couldn’t work out what, then I saw it and moved them away, but not before I got these ever so wobbly shots of them, but I love them they are priceless. How scary is it when your children start to get old enough to understand these things.