As we a coming to the end of Hypo Awareness Week  I though I would share a concern that has been on my mind lately. We have had 3 incidents recently where Jack has lost control. When I say lost control I mean really lost his temper and totally seen red, causing him to lash out in some way.

One of the incidents was during a football match and he hit his opponent who tackled him, now of course he was immediately sent off and fined and rightly so.

On another occasion he was on Holiday with his friends parents, they had an argument he hit and punched his friend square on the nose then ran off. When his friends Mum rang me to tell of course she was upset and a little angry and rightly so. 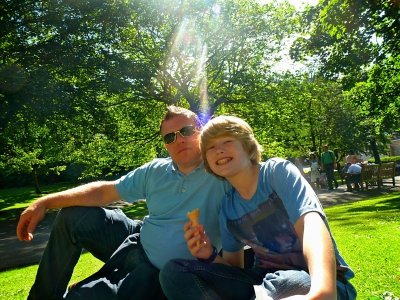 Now on these occasions I wasn’t present, he had tested his sugar, which did not appear low. But I know this is not my child, he is laid back happy go lucky chilled out and mostly always has a smile on his face, friends I have told who know Jack very well have also been baffled. Don’t get me wrong like every teen he can whine till the cows come home, is lazy and would starve rather than make a sandwich and constantly irritates his little brother. By no strength of the imagination is he perfect,  I am not deluded. But he is not aggressive.

Then I witnessed it with my own eyes two weeks ago, he wanted a sandwich, yet had turned one down at lunchtime. So Chris told him to make it himself, it turned into a Dad, Son standoff where no one would back down and he started shouting at Chris. Chris told him he was loosing his X box and marched into his bedroom and unplugged it.

Jack saw red grabbed the butter knife full of butter and threw it across the room, he then ran out of the house. I chased him and ordered him back to make his lunch and told him he could eat it in his room.  I returned to clean the butter and found Toby happily licking it off the floor. When he tested he was 5.6 not low, we couldn’t work it out?

Chris went to check on Jack 20 minutes later and he was fast asleep, we were baffled yes he’s a teen and can be a pain, but as I said he is laid back to the verge of horizontal most of the time. And he NEVER sleeps in the day, we decided to let him half another half and hour, but something told us no longer. After half an hour I went to wake him and he said he felt odd. His sugar was 2. Every time I think of this event I thank god we decided to wake him at that point. Once we had treated his Hypo he felt exhausted but was back to his old self in terms of personality.

Now this was the tricky one, did we give him back the X Box now we knew it was caused by a hypo? During these episodes he clearly has no control. We made the decision to maintain the ban for 24 hours. I hope this was the right thing to do, we decided if Jack realised there was a consequence too his actions maybe he would try to maintain control.

This is my theory I am not sure if its right, but after first hand experience I have noticed that at the time of these episodes Jack turns into the hulk, he seems unable to control this. At the time does not present low sugar but has a considerable drop after. Is this like a pre-crash episode? I just don’t know. All I know is it is totally out of character.

It breaks my heart that somebody would judge him on the basis one of these episodes, that is not the Jack we all know and love. He doesn’t recognise himself either, I could tell that last time, he felt frustrated by his anger. So please when a teen or child is acting like this don’t always think they are spoilt brats that needs controlling, sometimes it is quite a scared person who has no idea what is happening to them in that moment in time. And from parents that seriously take no messing it is a huge concern.