Home » Family Life » Advice for Henry the Cat
Dear Henry
Now before I start, this goes no further. The Cat next door would never run from me again if he found out I was running a cat advice clinic. But I feel sorry for you, so thought I would just explain few things that might make your life a little easier.

Firstly the Fat Lady, she is called Mummy, I know this because my Mummy tells me all the time, and I have had 4 of these. The first one was mean. When I lived with her I was very hungry and my fur fell out, one day a man came with a van so I decided to escape with him, he didn’t seem to mind, he made me better, gave me food and got rid of the scratchy things on me. The second Mummy was fussy, she said I made to much mess and was smelly, how very rude! So the man came again and I escaped. My next Mummy was nice but she got sick and had to go the hospital, when my mate the man come he said it wasn’t my fault, but my fur made her sick. Then I met this Mummy, her house is noisy with messy boys so she says I fit right in. At first I thought I might as well escape sooner rather than later, but she kept catching me and bringing me back, I decided she must like me so I don’t leave her side now.
I have had to work quite hard training her but she seems to be picking it up now, if I sit and roll over she gives me food, she is very clever as when I do this she realises I fancy a snack. If I cry at her it means I need a cuddle and again she is picking this up rather quickly. Also if I take her out, I can let her off the lead and she doesn’t leave me, this has taken a while to master but she is getting there slowly.
The one that earns the money, he is called Daddy; he said I would be the perfect dog if I had no fur. So I guess he likes me too? He doesn’t let me sit on his knee like Mummy, but I am allowed to sit next to him, he says I am too heavy. I have trained him to throw my ball, and do you know what? Sometimes I can keep him doing it for ages. But I do get him in trouble for playing ball in the house, he is that well trained he still does it when I ask him too, even though Mummy tells him off. 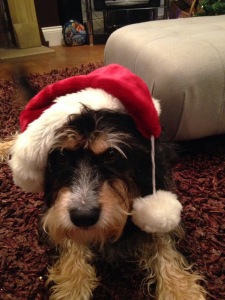 The noisy ones they are brothers, now they are just very silly sometimes, they like to put clothes and hats on me. I think they get confused and think I am human, cant they see I have fur and they haven’t? I don’t think they are as clever as they have been very easy to train, I can get them to give me snacks all day if I feel like it. I have trained the biggest to let me on his bed when my Mummy isn’t looking, she tells him she knows he does it. But we are clever so she can’t catch us.
The small one kisses me all the time, I think he thinks I am famous, or a royal dog as he doesn’t leave me alone, he was the easiest to train with a ball. I have also trained him to give me rides on his sledge when it snows, its great I don’t have to walk, he just pulls me around and calls me King Toby. I don’t mind if he thinks I am the king.
So Henry, you need to train your people, take it easy, start by training them to give you snacks, maybe throw a ball or those fluffy things you cats like. Don’t take them out until they are well trained or it could end in disaster. But take it from me, you can have those noisy ones trained in no time; they will be feeding you all day long, this time next year we will be pawing yourself on the back thinking good job, I have them all very well trained now. Good luck and remember keep this between us; it will ruin my street cred if this gets out.