Home » Brit Mums » Belvita Morning Victories and the Christie Family Morning Failures
When I got the opportunity to write about Morning successes with Belvitia  I must say I did giggle to myself. You see the first day of term this year was an epic fail. I wasn’t ever going to share this. But I am finally getting over the trauma somewhat, and now and feel ready to talk about it.

So I take you back to Friday the 5th of September at 8.20am, I must say, at 8.15 I was feeling pretty smug. Jack had gone off on the School bus on time, the house was tidy, lunches were made and we were ready to leave. We were just waiting for Emily to arrive (our neighbour who I drive to college)
I was pottering in the kitchen when Joe appeared in the doorway hunched over making an odd noise, I quickly realised he was choking; I ran to him and patted his back. Fortunately he stopped after a couple of seconds, but what felt much more like minutes. 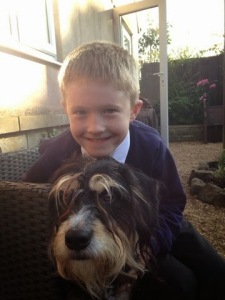 He looked up at me panic in his eyes and said “Mummy I have swallowed it,” he was a bit of a grey colour. “Swallowed what I said”. It seems he had swallowed a pound coin, but now felt it was stuck in his throat; he said he could feel it lodged there. I gave him water but he still claimed it was there.

How had he managed that, I hear you ask.  Exactly, how does an 8 year old manage to swallow a pound coin? Well, he was throwing it in the air and catching it. Joe never, ever stops talking, so his mouth is constantly open. He threw the coin up, stumbled forward and it bounced of his tooth and down his throat.
Grrr, I had a fully booked salon with my new students at 9.30am and Joe should have been at School. There was nothing else for it; a trip to casualty was in order. He looked fine in himself, maybe a bit grey but was breathing normally and coherent. Yet clearly I had to get him checked out. Poor Emily, she sat in the car making emergency calls and texts to work and Chris and then was virtually thrown out of the car at the roundabout near college and we continued on our trip to the hospital.
It is with a considerable amount of shame that you tell the receptionist at casualty your child managed to swallow a pound coin whilst in your care. To be fair to her, she just smiled at me, and nodded knowingly, she was clearly a Mum. 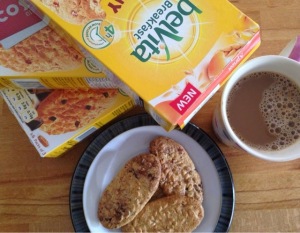 We were lucky casualty was very quiet and we were seen very quickly. The Nurse spent some time questioning Joe and decided X-rays were the way forward, but was told if the pound was found in his throat, it would have to be removed. At this point the day could only get better.

After several X-rays of Joe’s throat and tummy, we were told the pound was no where to be seen and sent home but told to keep an eye out for the pound, and take him back if we felt concerned. I must say Burnley General Hospital was wonderful. By 10.15 we were out of the Hospital and on our way to School. Before I sent Joe in a made him eat a snack and drink some water to ensure he could swallow OK.
After School and a frantic day at work (Thanks Jennie for holding the fort, until I arrived) I went home to see if maybe the coin has come out whilst he was choking, but it was nowhere to be seen. I read up on the dangers of swallowing a pound coin and was alarmed at how dangerous it can be.
So I bought wooden BBQ sticks and put them by the toilet, prepared for my hunt for the pound coin. I won’t go into detail but within 24 hours the pound did resurface. Joe wanted me to wash it so he could have it back, but no, it was wrapped in a bag and put in the bin, I just couldn’t face it.
So there’s my story of epic failure, as a result, to achieve a morning victory; all currency of any kind is banned in the mornings in the Christie household, coins now haves a curfew. It is considered an offence to be caught with a coin before school. So is throwing objects into the air whilst simultaneously having your mouth wide open, being caught in the act has severe penalties. 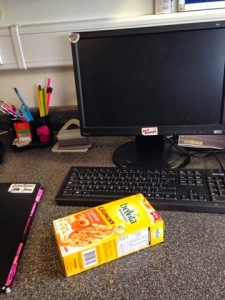 Eating breakfast at home is just not an option when you are feeding and herding a family around, so I keep my desk full of breakfast options. This week I have tried out the belVita crunchy range. My favourite is definitely the Choc Chip biscuits they go lovely with a cup of coffee, and set me up for the day. I am a person that is always thinking about my next meal, these kept me going until my lunch break and tasted great. Unfortunately a little too great as the ones I left at home have been demolished by the boys, but hey better that than them pound coins.

For me getting to work without a visit to casualty, getting time to eat a quick breakfast, and drink a cup of coffee, whilst I read my emails and prepare for the day is something I appreciate much more that I did 2 weeks ago.
This post is an entry for #MorningWin Linky Challenge sponsored by belVita Breakfast. Learn more at http://bit.ly/belVitaUK