Home » Memories » Phobia’s, where on earth do they come from?
I can believe I am writing about this but I thought it was time I addressed it personally and also find it quite a fascinating subject.
I used to work with a girl who had a phobia about tomatoes; we once put a tomato on a shoelace and hung it from the salon dispensary door. I mean what’s scary about tomatoes right?  We were all hysterical but poor Jodie she would not pass that tomato, no matter what.
Then there was Sherilee, she had a huge phobia about Un-painted toe nails. It literally knocked her sick; she couldn’t even look at them. Painted nails were fine! I remember one of our stylists waving her feet around in the air and Sherilee nearly passing out.
So my spider phobia seems quite normal. It started when I was a child. I was terrible, absolute terrified of even so much as a money spider. I could not look at spiders, I remember once I was at a friends and her mum was wearing a diamond encrusted spider brooch. I could not look at her because all I could see from the corner of my eye was this hideous brooch.
I know the exact moment I developed this fear, I was about 8 and was putting on a cardigan, my arm started to itch when I looked there was a spider between my arm and cardigan. I was hysterical and it went downhill from then. This is not learnt behaviour, as my Mum and Dad aren’t worried at all by spiders. In fact my Mum will pick then up!! Yes I know eeew. 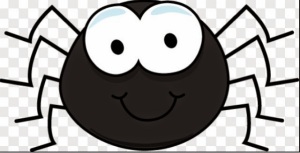 I remember the first time I went abroad; I used to check my bed every night for giant spiders, just in case. And still shake blankets and cardigans just to be sure there isn’t one lurking inside.
However things changed when Jack was born, I was determined not to transfer my fears onto him, and Joe when he came along.
I gradually got better at not screaming when I saw them, running hysterically and standing on chairs. I learnt to be brave and say through gritted teeth, “ooh look at that lovely spider.” Jack never touches them, but is not at all worried by spiders however Joe is like Bear Grylls with Wildlife, and is happy to pick up a spider, or any other insect that comes his way. In my opinion he is a little to brave.
Yes they still make me feel queasy; I can now be in the same room as one whilst someone else removes it. However I can’t really spend to long looking at one.
Yet from nowhere I have developed another phobia, one that gives me nightmares. I have no idea where it has come from. But it literally fills me with fear even thinking about them and I can’t even look at a picture of them, or watch them on TV; and that is crocodiles. I mean, when have I ever had an incident with a crocodile? Yet every time I visit America I have nightmares about them. I worry about staying in hotels with lakes and wonder if they have a crocodile warning systems? Yes I know you are thinking, she is stark raving mad, it is totally irrational. The boys think it’s hilarious and take great pleasure from leaving pictures of crocodiles on my home screen on the family PC. But where has this come from? It’s bigger than the spider issue; the fear is so real so tangible.
I am actually not sure what I hope to achieve from this post, I suppose he shares a bit of me, the real me. I only share the part of me that’s buzzing about happily here and there on my blog. Of course that is I, but I also have insecurities and phobias just like everyone else. But weirdly of all the things in the world that could make me quake in my flip-flops? The thing that really does the job is crocodiles.