I have been a huge Harry Potter Fan Since the day I read The Philosophers Stone, I read all the books the day they were released and watched all the films, mostly on release day, and have the box set.

Yes I am a total Harry Potter geek. I just love it. We have visited Alnwick castle to visit where Harry learnt to fly the broomstick, and can’t wait to visit the Wizarding World of Harry Potter at Universal Studios next year.

We tried to book the Studio Tour last year, but it was fully booked. Last week we finally got the chance to visit. And trust me it did not disappoint. We booked the premier inn in St. Albans the night before, it was only 20 minutes away and we wanted the boys to arrive fresh and raring to go rather than weary from a 3.5-hour journey.  As we booked the premier inn, in advance we paid just £30. And I must say, it was £30 very well spent. The reception staff were exceptionally helpful and friendly, the room was spotlessly clean and the Beefeater next door was great for breakfast and dinner.

So; we were up early and arrived with time to spare to collect our tickets. The queues were minimal, I would definitely recommend going early, although you are given a time slot it seemed much busier when we left.

As soon as I saw the studios I felt so excited, I was like child. So much so, the boys were rolling their eyes at me in embarrassment. However as soon as they entered they all felt equally as excited. Firstly we were ushered into a large studio where we watched a video about the history behind Harry Potter. When the film ended we were transported, as if by magic, to the doors to the great hall, I nearly leapt out of my chair with excitement.

We all stood there whilst the narrator chatted for a while, and then he did it, opened the doors. Wow, it was amazing just like on the film, it really was so magical.  We were allowed to spend quite some time in the great hall whilst a narrator told us lots of facts about the hall. It really was so spectacular.The hall was filled with memorabilia from the film, such as tables set for feasts and costumes from all the cast. It was the sort of space you could imagine holding a huge spectacular wedding.

We then left the hall and went into a prop area, this was fantastic, I spent ages looking at each display, one of my favourites were the makeup stations, they still had little post it notes all over the mirrors and photos of the artists children. Desks were littered wigs, makeup in many shades, and pins and grips. It must be a make up artists dream to work on such an epic production. Something nearly all of my students aspire to.

The costumes were equally as spectacular, any fan of the films would be able to recognise costumes from the Deathly Hallows, Goblet of Fire and many others.

We then progressed on to the Harry Potter sets,

There were areas everywhere, with props stacked and collected together, like Aladdin’s caves dotted about, and around these were the sets. I was great to see the portrait of the fat lady, followed by the Gryffindor dormitories and common room. These was so much to look at, you really could have spent hours in there. And the fantastic thing about the studio tour is there is no restriction on how long you spend there. As long as you are out by closing.

The Burrows was filled with many interactive features, the Boys loved this. It felt so homely that you almost expected Mrs. Weasley to walk in.

We turned a corner and there was Professor Snape’s Potions classroom, it was as spooky as it is in the film. I could see Joe’s eyes light up, he would have loved to get in there a mix some potions. And last but by no means least Dumbledore’s office, it really is something special, the effort and work that went into all the portraits of the sleeping headmasters, I wanted to put a memory in the pensive. It all felt so real. 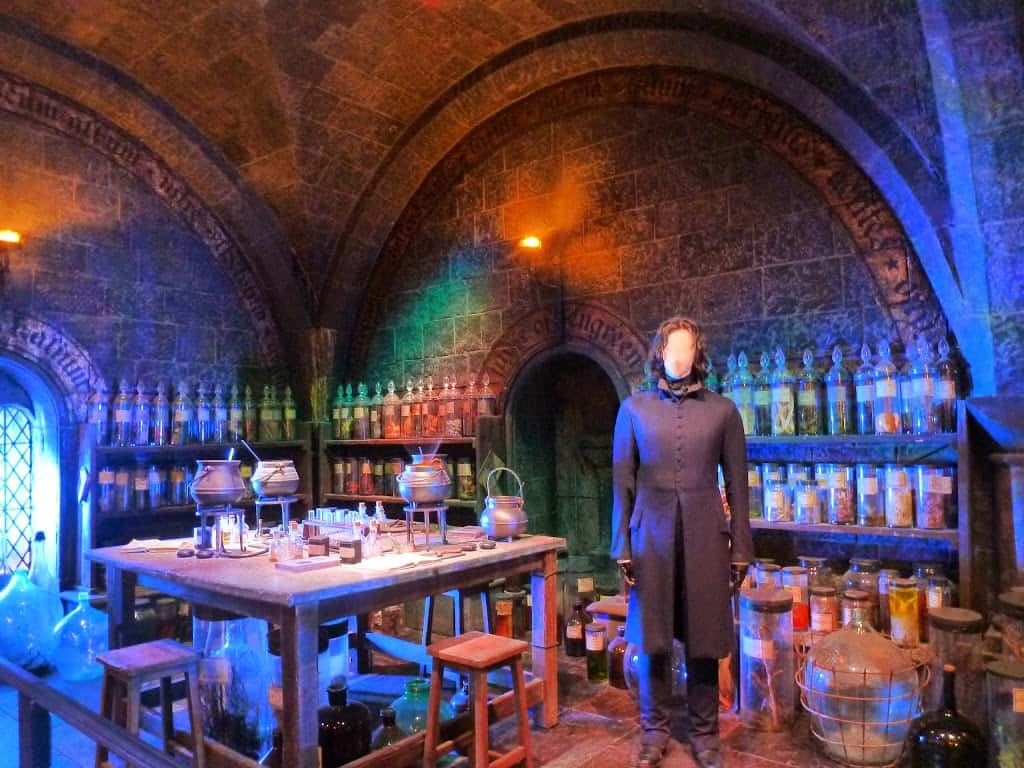 Wow after reading this back, I really am a Harry Potter geek. I have so many pictures I have split my post into 4 parts, how could I possibly blog such an amazing place in 1 post. What a genius idea to turn the Studios into an exciting, spectacular tour. I am so glad they did. It felt like the best treat ever being able to visit and see the magic in person.