Home » Books » Book Review, The Bay at Midnight, Diane Chamberlain
This is the first Diane Chamberlain book I have read and it certainly will not be the last.
This book is set between 1962  and the present day, the main character Julie who’s sister Isabelle  was tragically murdered in an accident by the bay of their summer home in New Jersey.
Years later her Mum, sister and herself have gone through life never discussing the incident until Isabelle’s ex boyfriend Ned Chapman leaves a letter on his death bed claiming he knows who the killer is. 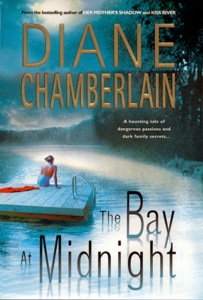 Julie knows George Lewis; who was committed for this crime and lived his life in Jail was not guilty, so sets out to find the truth. If not only to respect the memory of George, an old friend who had ended his days in jail, but to allow her family to bury the past for once and for all.

The search unearths many painful memories for all involved but Julie is determine to uncover the truth.

I found myself looking for excuses to read this book, and read it at every opportunity. I was so immersed in this book, like I was there with the characters observing the events unfold.  Diane Chamberlain was able to keep me in the dark until almost at the end of the book. A great read of which I thoroughly enjoyed, feeling I had spent some time back in America in the 60’s.